Abba Garima Monastery is an Ethiopian Orthodox monastery, located some 5 kilometres east of Adwa, Tigray Region of northern Ethiopia.  It was founded by Abba Garima who was among the Nine Saints in the sixth century. Abba Garima is believed to have been a Byzantine royal with healing powers who was summoned to Axum by Abba Pantaleon (one of the nine saints). Abba Garima is thought to have arrived in Ethiopia in 494 CE.

King Gabra Masqal built for him a monastery near Adwa, where he lived for some 20 years performing miracles and healing the sick. Above the monastery on a hill is a spring where Abba Garima is said to have spat on the spot and started a life form. The monastery has became known for its early manuscript copy of the gospels and its treasury.

The Abba Garima Museum was inaugurated on the 26th of may, 2012 in the presence of his Holiness Abuna Paulos I and the Ambassador of France, Mr Belliard. To assure a better preservation and exhibition of several historical items which are in the Abba Garima monastry. In addition, As the museum is located outside the walls of the monastery, women are admitted and will at last be able to view the Gospels and other treasures at this ancient site.

Short video showing the monastery and its museum.

The Gospels of Abba Garima also known as “the Garima Gospels”, are two Ethiopic illuminated manuscript gospel books written in two volumes on a thick goat vellum (Brana) in the Ge’ez language and preserved in the Abba Garima Monastery.

According to tradition, the gospels were written and partly illuminated by the Ethiopian missionary Abba Garima. It is believed that Abba Garima with the assistance of God wrote and illustrated the complete Gospels in a single day. God stopped the sun from setting until the Saint completed his work.

The Gospels are aslo known as “Garima I” and “Garima II”, of which the latter according to latest radio carbon dating is believed to be “the most ancient Christian manuscript decorated with paintings” and the oldest surviving Ethiopian manuscript of any kind. They are not known ever to have left the monastery; although, as the surrounding area was occupied by Muslims from the 9th to the 14th centuries, it is possible that they may have remained hidden in a cave for centuries, and then rediscovered.

Since no earlier manuscript was believed to have survived in Ethiopia, most outside scholars and scientists previously agreed that the gospels, based on Abba Garima’s teachings, were written centuries after his death, probably by priests in the tenth century.

However, recent radiocarbon dating conducted at Oxford University under the auspices of the Ethiopian Heritage Fund suggests they actually date from between 390 and 660, with a mid-date of around 530. These two books, could be the oldest extant manuscripts illustrated with Christian subjects in the world – older than the handful of known sixth-century illustrated manuscripts.

As to the dating, 530 gives only a rough indication, but it does suggest that the Garima Gospels include some of the earliest Christian paintings (other than wall paintings). The earliest dated illuminated manuscript is the Rabbula Gospels, which was created in 586 in Beth Zagba, in modern-day Syria, and is now in the collection of the Laurentian Library in Florence. The Cotton Genesis (British Library), Vienna Genesis (Austrian National Library) and Rossano Gospels (Rossano cathedral, Italy) are likely to be slightly earlier.

The tradition of illuminating the Gospels is an Ethiopian orthodox iconography tradition, especially painting of the portraits of the evangelists at the beginning of the each evangelist gospel. Nonetheless, one of the striking aspects of the Gospels is they are illuminated with the Eusebian Canon tables and Evangelists portraits. Architectural decors together with pictures of different birds adorn the canon tables of these Gospels, and one of the books (Garima II) includes portraits of the Evangelists.

However, Jacques Mercier a specialist in Ethiopian art at the Centre National de la Recherche Scientifique in Paris argues that both text and illuminations were produced within Ethiopia.

“The illustrations found in the Garima Gospels, which include a set of the Evangelists, are evidence of an Axumite School of painting,” says Jacques Mercier.

Images of birds in Gospel of Abba Garima

Evangelist portrait, from Garima 2, likely the earlier of the two Garima Gospels

Mercier argues that the scored lines, added to help the scribes writing the text, were also used for the layout of the illuminations. Because some of the 28 horizontal lines that are visible behind the pink background of the Evangelist Luke (image below), and the upper and lower decorated frames have been painted directly on top of the lines. This shows that the image might have been painted after the text.

Mercier argues that if the Ge’ez text was written in Ethiopia, as seems highly likely, then the illuminations must have been made there too. Theoretically, the images could have been painted by a Middle Eastern artist who had travelled 3,000km south, but Mercier argues that it is much more likely that they are the work of an Aksumite artist, copying earlier (lost) images made in the Middle East or Aksum. Hence Mercier strongly suggests, a school of painting and a workshop for the production of manuscripts must have been active in Aksum in Late Antiquity.

Alessandro Bausi, “Ethiopia and the Mediterranean World in Late Antiquity: The Garima Gospels in Context”, resume of conference proceedings, November 2013. click for pdf. 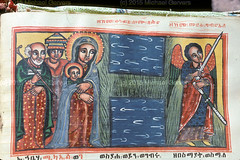 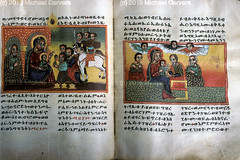